June 13, 2016
As you have probably heard, Ashley and I are expecting a baby boy at the end of September. We are beyond excited. We have discussed a multitude of names and have finally decided on a name for our son.  We wanted to pick a name that we love and also has meaning.  We believe we have found one that meets both criteria.  So we are happy to announce the name of the next Hudson boy will be...

Levi is the name of Jacob & Leah's 3rd son in the Old Testament.  I identify closely with the story of Jacob as he wrestled constantly with the struggle between his own human identity and the man God created and called him to be.  His ultimate identity was not found in his own cunning ways to gain notoriety but in the God who saves and redeems sinners.  He is one of my favorite OT characters.  Also Jacob and his wife Leah met under unusual circumstances generated by wrong choices that God used to create a lasting bond in spite of the choices that landed them there ... a story that resonates deeply with Ashley and I.

Levi was also the priestly tribe of the 12 tribes of Israel.  Our Levi comes from a heritage of people set aside for God's service so it is fitting.

In the New Testament, Levi is the name of the tax collector Jesus called as one of his 12 disciples.  He also went by the name Matthew.  And if you know the story of Matthew, you know it is one of scandalous grace.  Tax collectors were some of the most despised and dishonest people in the Roman Empire.  And yet Jesus stops specifically at the booth of Levi the tax collector and invites him to become one of his followers.  The grace of Jesus crossed boundaries that no religious person in his day would even approach.  He pursued sinners like Levi.

When Matthew followed Jesus, one of the first things he did was to invite Jesus to a party for his friends and acquaintances - who were all labeled "sinners" (Luke 5:27-32).  The religious were infuriated Jesus would attend such an event and hang out with such shady people. They even labeled Jesus a "friend of sinners" - a title He embraced and affirmed.  Levi stands as an amazing testimony of God's radical grace and how he crosses boundaries we tend to frown upon to extend his message of forgiveness and love. Ashley and I have experienced this grace in a real and lasting way and we want the name of our son to reflect that reality.

The name Levi means to be joined in harmony.  Ashley and I have been joined to Jesus and each other by grace and Levi is a product of our story of redemption and healing.  We want his name to echo the pursuing, radical grace of Jesus.

Yes - you read that correctly.  His middle name will be Lockey.  My grandfather (Pappaw Hud) was named Lockey Lynue Hudson.  While Lockey is an unusual name, we want Levi to be named after my Pappaw (and his great-grandfather).  Pap Hud was a man whose life was forever changed by the gospel of Jesus.  For his first 40 years, his life was marked by vile living, alcohol abuse, fighting, and depravity.  And then he encountered the grace of Jesus and his life was forever changed.  The second half of Pappaw's life was marked by gentleness, delight, humor, grace, and a love for Jesus and his family.  I never knew the "old" Pappaw.  I only knew the Pap Hud defined by grace.  He was not perfect.  His faith was raw. And that's one of the things I most loved about him. There was no facade.  He never forgot where he came from and who He was in Jesus.

Prior to the conversion of my dad and then grandfather (who God saved after one of Dad's first sermons), there is no real history of faith in our family.  In other words, I am just one generation removed from a family tree marked by scandalous living.  My Pappaw serves as a reminder of how redeeming grace transforms not just individual lives but generations to come.

Pap Hud has been gone for several years now. I still miss him.  He and I were close. I spent two of my high school summers living and working with him.  I will never forget those times. It was in those day-to-day moments where I saw his faith lived out in a real way.  He was not a pastor, preacher, teacher, or deacon.  He was just a man who loved people, who people loved, and whose life was marked by grace.  It is with great honor we name our son after him.

We love you Levi Lockey Hudson. And we hope your life is marked by the same grace that has transformed our lives.

What's in a name?  A story marked by grace. 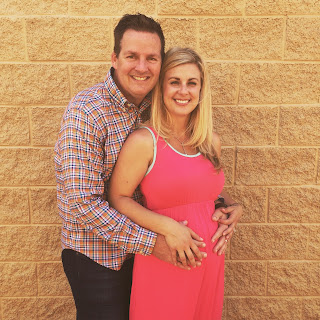 Popular posts from this blog

A New Decade of Valleys

January 07, 2020
For a few years now I have basically put down my pen . Outside of writing weekly messages for City Church and a few other thoughts here or there, I have not had a lot to say publicly. Honestly I still don't. God has been teaching me to listen and absorb more than I speak. And in the process, I think God is helping me find my voice again. I am not sure. But I think . I have been through a lot of life in the last decade. The 2010s included both my lowest moments of life and also many of my most favorite memories. God has generated life from death, beauty from ashes, redemption from brokenness. And that is kind of how life works: the good, the bad, and the ugly tend to manifest themselves for seasons of time ... each season gradually teaching, shaping, and transforming us. Most of my lowest moments in life have been self-induced. That is not always the case. Some valleys are the direct consequence of the brokenness of the world we traverse. No explanation provided. Other times
Read more

When a House Becomes a Home

A little over 9 years ago Ashley and I bought a house. We were just starting to come out of one of the toughest seasons of our lives and God graciously opened several doors for us to purchase a beautiful house that has served as a safe place for us for almost a decade. Our house became a home - a home we love. We love it because of what God has done inside these walls both in our lives as a couple and the lives of those we love the most in this world.  In our home, God has rescued wounded love, healed broken hearts, restored hurting souls, and repaired damaged relationships. In our home, we have laughed, cried, laughed until we cried, celebrated, hurt, prayed, argued, rested, wept, remembered, dreamed, danced, played, sang at the top of our lungs, and made more memories than we can ever recall.  Over the course of these 9+ years, we welcomed into our family our precious gift of grace Levi and we said goodbye to each of his three older siblings as they spread their wings to fly.  We hav
Read more

Be Still & Know that He is God

July 03, 2020
pan-dem-ic: occurring over a wide geographic area and affecting an exceptionally high proportion of the population.   The word itself generates fear, uncertainty, and insecurity. Pandemic … the word feels global. Uncontrollable. Uncontainable. Chaotic. And always present. Turn on the news – there it is. Scroll social media – there it is. Engage in conversation with a friend or family member – there it is. Run by Chick-fil-a to grab some heavenly goodness – There. It. Is. Always lurking. We can’t get away from it.   And it is in these seasons we are tempted … we are tempted to take our gaze from the Creator and to focus on the brokenness of the creation.   Psalm 46 offers a different perspective.   God is our refuge and strength, a very present help in trouble.   Therefore we will not fear though the earth gives way, though the mountains be moved into the heart of the sea, though its waters roar and foam, though the mountains tremble at its swelling.             Th
Read more